I have been going through fast.ai for a couple of months . I got to admit that there were lots of stuffs and awesome techniques that I learned in the process. I’ll make sure to update all those in my Blog . All thanks to Jeremy Howard and Rachel Thomas for their efforts to democratize AI. Thanks to the awesome fast.ai community for all the quick help .

This below picture depicts my journey till now which makes it an interesting one.

So Brace yourselves and focus on Part 1 Lesson 2 of Fastai course.

Importing the packages and data preparation for the deep learning model to learn.

This blog post deals with Dogs vs Cats Image Classification Model. It has been taught by Jeremy Howard in Part 1 Lesson 2 of FastAI Course.

Import all the libraries as below that will be used in this machine learning Model.

The output to the above commands should return True.

Use these commands prefixed by ‘!’ mark .

The above three commands helps to navigate between directories.

The images of dogs and cats has been downloaded using the following command.

The structure of the folder should be as follows:-

Set the path to where the data is stored

Check whether the files have been downloaded using the following command:-

The f’ above stands for f-Strings .It’s a new way to format Strings in Python. To know more about f-strings, please check this awesome link by realpython.com.

The following lines of Code shows how to train the model using fastai.

The architecture resnet34 which is used has been saved in arch variable . The data is saved in data variable as it looks for the data in the PATH specified earlier . The tfms is a part of data augmentation which will be dealt later in detail.

The pre-trained method creates the new Neural Network from the arch model(resnet34). The fit method trains the model using the learning rate and the number of epochs specified. And an accuracy of 0.9895 has been obtained.

Let me explain the above image. Initially, the parameters that has been chosen were random. The loss was high at this point of time . High Loss indicates that during training, the difference between the ‘outcome / predicted value’ and the ‘ target value/ labels ’ is more. Hence an approach should be followed using which this difference should be made least . Convergence or reaching to the local minima means the loss is minimum at this point and hence the difference between the outcome and target value /labels is the least. This process is known as Gradient Descent.

The Learning rate(LR) in the fit function above is one of the most important parameters and should be carefully chosen so as to make the model reach an optimal solution in a fast and efficient way. It basically says how to quickly reach the optimal point in the function .If LR is low the process is slow and if its too high then there is a great chance that it might overshoot the minima. So the LR has to be carefully chosen , so as to make sure the convergence (reaching the local minima) happens in a efficient manner . The image below describes the above concept.

How to Choose the Best Learning Rate ?

!!! Don’t worry , Jeremy Howard has your back. Jeremy has mentioned a wonderful way of finding the Learning rate and its known as

Please check the code below.

To choose the best learning rate, here are the following steps:-

Concept behind Going back by magnitude 1 :-

Although at this point the Loss is at minimum but the Learning rate chosen at this point is too high and continuing with this learning rate, won’t yield in convergence. Please check the image below for explanation.

NOTE :- Learning rate finder is one of the most important hyperparameter and if adjusted /chosen properly will yield the best results.

One way to improve the model is by giving it more data . Hence we use data augmentation . Wait , But Why Data Augmentation?

Note:-Data Augmentation is not creating new data , but allows the Convolution Neural Network to learn how to recognize dogs or cats from a very different angle .

For data augmentation we pass transforms_side_on to aug_tfms in tfms_from_model() function. transforms_side_on will give different versions of image by flipping it horizontally. It makes the NN to see the images , as if it has been taken from side angle, rotate them by small amounts and slightly vary their contrasts , brightness and slightly zoom in a bit , move around a bit. The variations can be seen in the image below.

For data augmentation to take place write the following code

Let me explain in detail the following code and its relation with above made statement:-

When trained using precomputed activations , the accuracy is 98.8%:-

To put data augmentation to work , set precompute=Falseand check for the accuracy. In the code below cycle_len is an important parameter and will be dealt in detail later in this post.

The accuracy has increased a bit to 99.1% and the good news is that , it is not overfitting and the training loss has decreased further . To further improve the model lets focus on:-

In Cosine Annealing , we train using a higher learning rate when not near minima .When getting close to local minima , switch to a low learning rate and do few iterations on top of this.

The above diagram shows a simple loss function . In real , the datasets are represented in a very high dimensional space and there is lot of fairly flat points and these aren’t local minima. Suppose our surface looks like the below diagram:-

Started at the red point no 1 and reached the global minima as shown by red point no 2 but here it doesn’t generalize very well . If this solution is used, in case of slightly different dataset , it will not lead to a good result. On the other hand red point no 3 , will generalize very well in case of slightly different dataset. Our Standard Learning rate annealing approach will go downhill to one spot and in high dimension there is a great chance of being stuck in a spiky zone , where it will not generalize better , hence not a good solution . Instead a Learning rate scheduler can be deployed which will reset and do a cosine annealing and jump again so that it will jump from point 2 to point 3 and so on , until it reaches a point where the generalization is really good.

This above process is known as SGDR(Stochastic Gradient Descent with Restarts). The best part of this SGDR is once a “nice smooth curve like surface” is reached , it wont restart anymore . It actually hangs out in this nice part of the space and then keeps getting better at finding the reasonably good spot . Please check the diagram below.

It is advised to keep saving the model at intermediate steps. To do so use the following commands:-

The model is saved in the models folder within the dogscats folder as shown below:-

Note:- Precomputed activation are without any training. These are what pretrained models created with the weights we downloaded.

What else can we do to make the model better?

So far the pre-trained activations have been downloaded and directly used. The pre-trained activations or the precomputed weights in the CNN kernels are left untouched (i.e no retraining of precomputed weights has been done yet). The pre-trained model already knows how to find at early stages edges, curves, gradients and then repeating patterns and eventually the main features. Until now, only new layers were being added on the top and models learned how to mix and match the pre-trained features. If a model trained on Imagenet is extended to a case like “Satellite images classification” where the features are completely different, most of the layers are needed to be retrained as the features are completely different. Hence a new concept is needed to be explored named as:-

To learn a different set of features or to tell the learner that the convolution filters are needed to be changed , simply unfreeze all the layers of neural network. A frozen layer is one whose weights are not trained or updated.

Unfreezing the layers will make the layer weights open to training or updating. But the initial layers need little or any training as compared to the later layers of deep learning model . This holds universally true because the work of initial layers is to learn edges and curves while the later layers learns about the important features. Hence the learning rate is set different for different set of layers. This concept is known as Differential Learning Rate .

After making the required changes , train the model as shown below .

Earlier cycle_len=1 and number_of_cycles=3 parameters were discussed . Just a refresher again, cycle_len=1 is the number of epoch and number_of_cycles=3 means the learner will do 3 cycles each of 1 epoch. Now a new parameter has been introduced named as cycle_mult=2. This cycle_mult parameter multiplies the length of each cycle after each cycle . Here the multiplication factor is 2. Hence (1+2*1 +2*2 )epoch=7 epoch. What this translates to is if the cycle length is too short , it starts going down to find a reasonably good spot and then pops out and again goes down and pops out . It never actually gets to find a good spot , that is both a good minima as well as good at generalizing . Its a matter of chance . Its not exploring the surface. So to explore the surface more set cycle_mult=2. Now the graph looks like more exploring:-

As observed, till now the accuracy has increased till 99.0% and the losses have drastically decreased a lot . There is one last way to make the model better . Its known as

On Validation /Test dataset , all of the inputs are required to be a square . This helps the GPU in fast processing . It won’t process fast if the input images in validation dataset are of different dimensions . To make this consistent it squares out the picture in the middle. As in this following example:-

If the picture above is squared out in the center , it will be tough for the model to predict if its a dog or cat as its only the body that gets into the validation dataset. For this (Test Time Augmentation) TTA is being used. It will take four data augmentation at random as well as the unaugmented original center cropped image. Then it takes the average of all the prediction on all these images .That’s our final prediction.

Note:- Applicable to test and validation data set only.

To get a summary of our classifier, plot a confusion matrix. A confusion matrix is used in image classification to know how many were correctly or incorrectly predicted as shown in the image below.

Interpretation of the Confusion Matrix in Image Classification task:-

!! Hang on , More such interesting stuff coming soon . Until then Goodbye 😉!!

P.S. — In case you are interested checkout the code here . 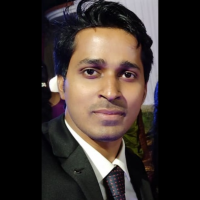